This was indeed a glorious ride and thanks to Deputy Dawg, alias Andrew Rusack, for organising it (and not stopping every 5 minutes to repair punctures). After last week’s record tally of punctures, Andrew had a couple more on returning from the Duxford Air Show, but claimed he enjoyed the walk back to Wendens Ambo.

Today’s ride included a fast downhill from Therfield, followed by a panic pedal along suicide alley (the A505) before quiet lanes again to Litlington, Steeple Morden and Ashwell, where we stopped at The Jester, near the station for coffees / beers in about equal numbers. Then it was mountain climbing time with a long ride back to the Therfield / Sandon ridge where the views were superb and the riders split into 2 groups for the final miles home. Those who went via Therfield clocked up 29 miles whilst those who took the scenic route via Sandon did 33 miles. Needless to say, the final ascent towards Great Chishill up the Seven Sisters resulted in Alison being very busy on the beer pumps in The Pheasant, where a good lunch was had by all.

Here is the map for our glorious Thursday ride in the company of Andrew R, Vernon G, Martin W, Ken W, John B & John T. 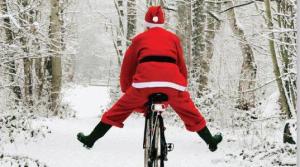 If you are planning to go and wish to book places, please send Deputy Andrew an email headed Windmill Club Christmas Lunch indicating how many in your party.  The email address is andrew@thsolutions.org.uk

The ride started at 9.30am and stopped almost immediately outside the windmill at Great Chishill for a photocall – watch for a change in the blog’s cover pic soon, as above, featuring our leader Maurice, deputy dawg Andrew R, Vernon, John T, Ken W and Martin W. This was to be only the first of many more stops!

The second was a stop at Fowlmere aerodrome where we were allowed into the hangar to see a collection of aircraft in use, including a magnificent Gypsy Moth biplane. We also saw this memorial to Canadians based at Fowlmere during WW II: 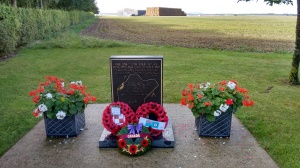 Then it was a stop at the deli in Shelford for a delicious cup of coffee before the first of THREE punctures affecting our erstwhile deputy. Here he is mending the first outside Sawston with the help of our chief mechanic Maurice: 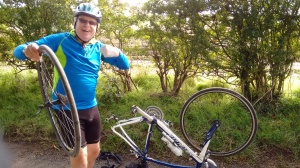 Being late for lunch by this time, Maurice generously came to Andrew’s rescue by bringing his van to pick him up but by the time they met our deputy had fitted a new tube and pedalled furiously as far as Heydon. The moral of this story? Check tyres for small flints before each ride and buy quality tubes and tyres!

So, eventually, we all sat down to an excellent lunch at The Pheasant where we were joined by Kell who was looking very well and had been back on his bike.

Thanks to Andrew for organising such an interesting and eventful ride!

Seven riders ventured out at 17.30 despite gusty winds and rain showers for a 15 mile ride from Nuthampstead, followed by a fascinating talk on the WW2 Pathfinder force.

Great to combine the two activities on the eve of the 75th anniversary of WW2 Battle of Britain.

Another interesting ride mainly through Hertfordshire with Maurice W, John T, Andrew R, Ken W and this week were joined by Vernon for the first time this year – Welcome back Vernon to the Cranky Club.

The map of this 35 mile circuit is below. Thanks to Andrew for uploading it.

Maurice, Andrew R, John B and Martin W pedalled off at 10.00am after waiting in the kitchen of The Pheasant, courtesy of Ollie and Simon, for the rain to stop. After that we had a dry ride towards Wimpole via Reed, Therfield and Ashwell before returning after refreshments (and wasps) at Wimpole via Orwell, Barrington and Fowlmere to The Pheasant where an excellent lunch was had and thirsts quenched. Thanks are due to Maurice for a splendid route.

The beast of Wimpole (the one with horns, not Andrew!)

This was a ride of two halves, a flattish circuit of Rutland Water with rough tracks in places and a hilly section towards Uppingham, which we did not quite reach due to the need to descend and ascend yet another steep hill twice, and we didn’t want to watch the spectacle of a certain cranky member dismounting again! A highlight of the ride was seeing the famous Seaton railway viaduct with its 82 arches which crosses the valley of the River Welland. It is the longest masonry viaduct in Britain – 1,275 yards. The first brick was laid in March 1876 and it was finished in 1878!

The local beers were another highlight and a good lunch was had at The White Horse in Empingham after a ride of only 25 miles but which felt more like 50. Thanks to Maurice and John T for organising the ride. 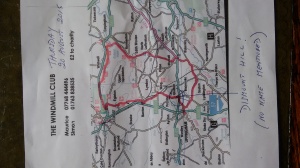 The rider in question was only obeying instructions – Ma Lord 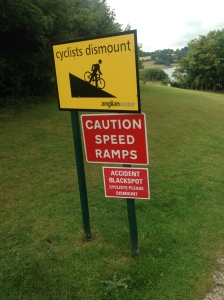 Hills seem to be a feature on this ride and one rider who will remain nameless, dismounted near Uppingham due I must add to a creaking crank and was forced under duress to buy a round of drinks for his sins at The Old White Hart- Seaton. Both rider and bike should make a full recovery. 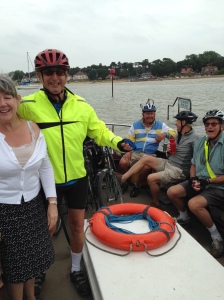 The question is which pint has the Ginger Beer additive ??? 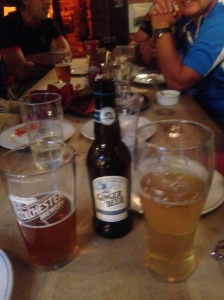 The route we took is above but Andrew R has successfully managed to load to the site the route on Map O Meter.
Click on the heading to open the map and see the detail of this interesting route. Starting at The Fox Inn in Newbourne near Ipswich, Maurice led Andrew, Ken, John T and Martin on a 43 mile ride via Felixstowe Ferry to Bawdsey and then to Orford in a strong head wind. Stopping for coffee, cake and cockles at the quayside we then cruised back at high speed to Woodbridge where we saw the tide mill and marina, followed by lunch at The Fox Inn and a welcome pint of Adnam’s Southwold bitter. Thanks, Maurice, for organising a great ride in a location which missed all the storms elsewhere.

There were two groups who set off from The Pheasant at 6.00pm, hares and tortoises. The hares sped off on a 23 mile ride via Elmdon, Strethall, Littlebury, Newport, Rickling, Clavering and got back to The Pheasant, having averaged 14mph, at about the same time as the tortoises who rode 19 miles via Wendens Ambo, Newport, Arkesden and Chrishall. It was a pleasant, dry evening with stunning views towards Cambridge as the sun set on the way back, followed by the usual wonderful goujons and chips at The Pheasant. Andrew R, however, was so enthusiastic about the ginger beer in his shandy that he converted Martin W’s fine pint of Restoration bitter into a shandy too! Thanks a bundle Andrew!

Maurice, Andrew, Lindsey R, John B, Lynn B, John T, Steve, Lynn & Frances set off from Waltham Abbey cycling beside the Lee Navigation via Enfield Lock and Ponders End eventually arriving at the Olympic Park. From there to the Hertford Cut and down the Regent Canal to Limehouse Basin and the Grapes Pub for refreshments (bang on opening time)

As John B, Lynn and John T became ensconced at the Grapes, Maurice led the rest of the group to Tower Bridge, Tower of London, St Katherines Dock and a well deserved lunch. We certainly saw all the sites yesterday including The Gloriana Barge ( built for the Queens Diamond Jubilee). As a bonus as we left the Grapes Pub we saw the actor Sir Iain Mclellan (who owns the pub)

On the return it was a detour around the Olympic Park before returning to Waltham Abbey.

Thanks to John B for organising a superb cycle ride from Great Chishill to Puckeridge – Standon – Latchford- Much Hadham- Little Hadham – Brent Pelham.

Enroute to Standon we passed a very large openair pop concert venue called “Standon Calling” an event that has been running annually for over 10 years -We all said we would go to this rave however, no one has heard of any of the groups in the lineup – I wonder why ?? .

A brief coffee and beer stop (for John B) at Little Hadham and a sprint back to The Pheasant for a well deserved lunch.