A large gang of 11 Windmillers gathered at The Black Bull in Balsham at the early hour of 9.00am in order to accommodate the needs of cricket fans and others who needed to finish earlier than usual.

The incidents began before the start when Yorkshire Brian’s bike toppled over on the top of Brummie Brian’s car on the way to Balsham. Luckily the wheel straps held it on and there was no damage to the bike, but Brian’s red golf is now sporting a small bruise on its roof. Incident over, the Brians were joined by Maurice, Andrew, John B, Keith, Sandra, Rick, Chris, Lawrence and Martin and everything was going smoothly through delightful empty lanes on a beautiful day when a call of nature was required by Maurice, signalling politely as he pulled into a gate entrance. However, his signal was not seen by all those behind resulting in a rear end shunt and a second incident for Yorkshire Brian who fell off and suffered some minor grazing. Nurse Sandra rushed to administer first aid with a wet wipe and we were soon on our way again.

Other than Lawrence steaming on ahead and missing a junction in Withersfield, almost requiring a repeat of the ‘Do a U turn’ message texted to him whilst en route from Wells to Kings Lynn, we were incident free for the rest of the ride.

Arriving back earlier than expected at The Black Bull, due to not being able to find a coffee stop, we were sampling some fine beers by 11.45am and were joined for lunch by Ken who had cycled up from Ickleton after a hard morning’s work in Cambridge. Here is a map of the route taken: 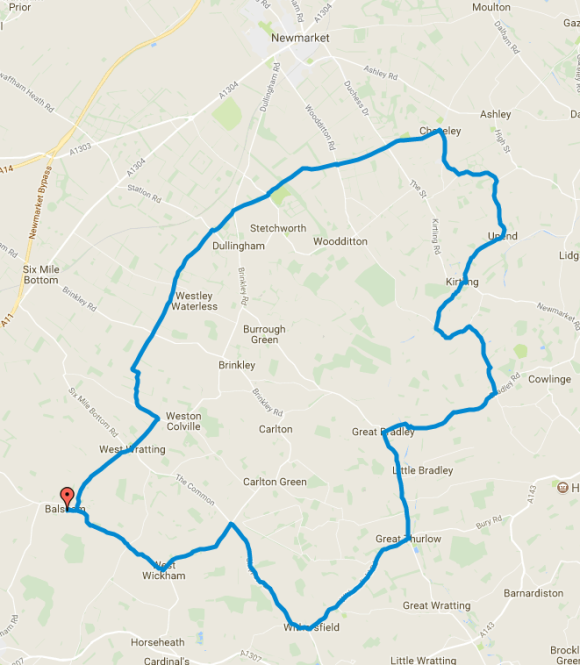 Thanks, Maurice and Andrew for your organisation of a great ride.