Vernon was due to take part again in the annual London – Cambridge ride on behalf of Camsight, a local charity which provides support for blind and visually impaired people. Steering a tandem with his blind friend Alan Chamley on the back was the plan but Vernon was called into hospital just a few days beforehand for an operation requiring an overnight stay and so he asked me if I might be willing to take over. Never having driven a tandem before, the first journey out with Vernon on the back as ‘stoker’ was scary in the extreme but we managed to get as far as Balsham for a pint in the Black Bull before heading back to Sawston where the tandem is kept in Alan’s garage. A subsequent trip with Alan, also to Balsham, and a tweaking of the handlebars was sufficient for me to accept the request provided Alan wasn’t too scared by my driving. He pronounced he was ready to take the risk, silly man, and so at 5.00am on Sunday 2 July we set off from Sawston to cycle 8 miles into Cambridge to catch a bus to the start, with the tandem going by lorry.

Tom also offered to come along and so together with Andrew’s support, who rode south to meet us in Berden, we had three Windmillers supporting Camsight. Andrew also took the pics.

Setting off from Pickett’s Lock at 8.17am we pedalled on the flat and downhill at a fair old speed. It was the hills that got us, not helped by the tandem finding it difficult to engage with its granny gear which meant getting off and pushing at times. But we had a moving average of over 11mph the whole way thanks to the flat and downhill bits.

After a couple of stops for refreshments, Tom, who set off at a brisk pace about an hour and a half behind us, caught us up, unsurprisingly, in Arkesden where the village community laid on a fantastic welcome. He then whizzed off toward the next stop at the Bees in the Wall at Whittlesford where it was wonderful to see Vernon looking extremely well, having been let out of hospital the day before. Tom’s wife Jo was there too together with Vernon’s Moira and my wife Penny and elder daughter Vanessa. We all enjoyed a good lunch in the garden before pedalling the final 10 miles to Cambridge via Newton, Harston and Haslingfield, arriving at 3.15.

There were 7 other tandems taking part from Camsight and it was good to see the others at stages during the ride. Our top speed of 29.8mph was topped by at least one other pair of riders, two ladies who claimed 30.5mph.

An ice cream and yet more water was followed by 8 miles back to Sawston, making a total of 80 miles for the day.

Camsight are keen to develop a closer relationship with the Windmill Club and have some spare tandems available. Tom has expressed interest in riding next year and others would be welcome too. Some commitment is of course required during the year to ensure each team is fit – Vernon will be able to give details of how much is required as he has been riding with Alan for some time. I feel sure Alan will be relieved to have Vernon back in the driving seat as soon as possible. 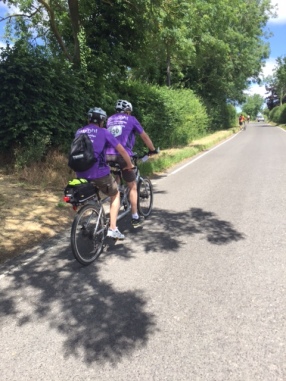 Thanks, Tom and Andrew, for your support and to Vernon and Alan for trusting me to ride the beast.