The origins of Valentine’s Day are murky and so it was very appropriate that Suffolk was shrouded in thick fog as 10 Windmillers gathered at The Red Lion in Great Wratting, feeling cold and not the least bit romantic. The forecast had been for mild weather, and the sun had been shining en route to Great Wratting and so there was the prospect of it breaking through, and indeed it did.

Coffee was served and lunch orders were placed before departing but due to snarled up traffic on the A505 and other places it took a while for all to assemble. Eventually, Maurice signalled the start and he shot off, lights blazing, hotly pursued by Andrew, Ken, Chris, Roger, Lawrence, Victor, Simon T, Graham and Martin. Graham had already clocked up 18 miles by setting off early from Ickleton, and would pedal back home at the end of the ride, thus laying an early claim to the 2019 longest distance award. Sandra – you have competition this year!

It was not only foggy but very cold and so we welcomed the first hill and yearned for more in order to warm up. ‘The views here are fantastic’, said Maurice at one point even though he could only see the end of his nose. But we believed him and just as we reached Glemsford for a coffee stop the fog lifted and we were treated to a glorious sunny Suffolk day.

There was some speculation that Glemsford had a café but after making enquiries anongst the very pleasant local population the ‘café’ turned out to be the village store which possessed a jammed up coffee vending machine incapable of producing a standard white coffee let alone a cappucino with chocolate stripes. However, after several bangs and opening up the interior to inspect the innards, Baristas Maurice and Simon unjammed it and succeeded in persuading it to produce some brown coloured liquid. Meanwhile, other Windmillers stood around talking to the locals, who had never witnessed such a gathering before of so many cyclists in their shop, and enjoyed some hot and spicy vegetable soup ladelled out by a member of staff.

Having warmed up and said goodbye to Mr Gnome and his friends, we then enjoyed a Suffolk Spring day in all its splendour – wonderful views, pretty cottages and impressive mansions as we cruised through the lanes whilst also ascending and descending some significant hills.. Other than Simon’s chain coming off at one point it was an incident free ride despite the early fog, quite a lot of difficult-to-see potholes and recent hedgecutting.

By this time the temperature had probably reached an unseasonable 13C but we weren’t complaining and it continued like this all the way back to The Red Lion where it was good to be joined for lunch by Simon O and his dog, followed shortly afterwards by John B who had also been riding around the lanes. Valentine’s Day was in full swing, with the Landlord sporting a particularly interesting tie but in the interests of decency it is best left to the imagination.

And here is the route taken, a real half and half ride anti-clockwise. Half in fog and half in sun: 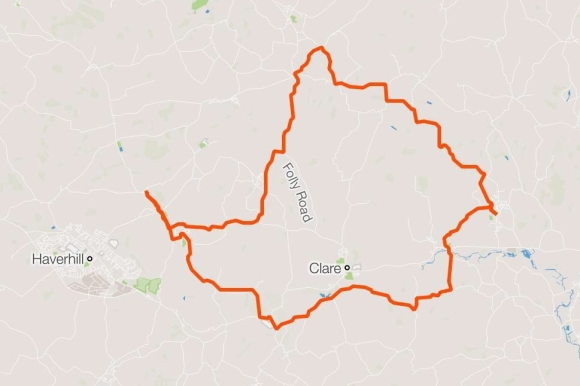 Thanks go once again to Maurice for planning the ride and doing a great job of not getting lost in the fog. Well done Maurice! And, of course, thanks to Andrew too for getting us to the starting line, and for the Strava map above.