For the third week running a baker’s dozen of Windmillers assembled for a ride around our beautiful local lanes. Starting this time from The Fox & Duck in Therfield, Maurice chose a clockwise route via Baldock, Ashwell, Guilden Morden and Royston before the climb back to Therfield.

Accompanied by Andrew, Vernon, Birthday Boy Keith, Sandra, Ric, Brian B, Brian Y, Chris, Lawrence, Simon, Graham and Martin, the group set off a bit earlier than usual so that Maurice could fit in a flu jab in Royston on the way back.  Here is the route taken: 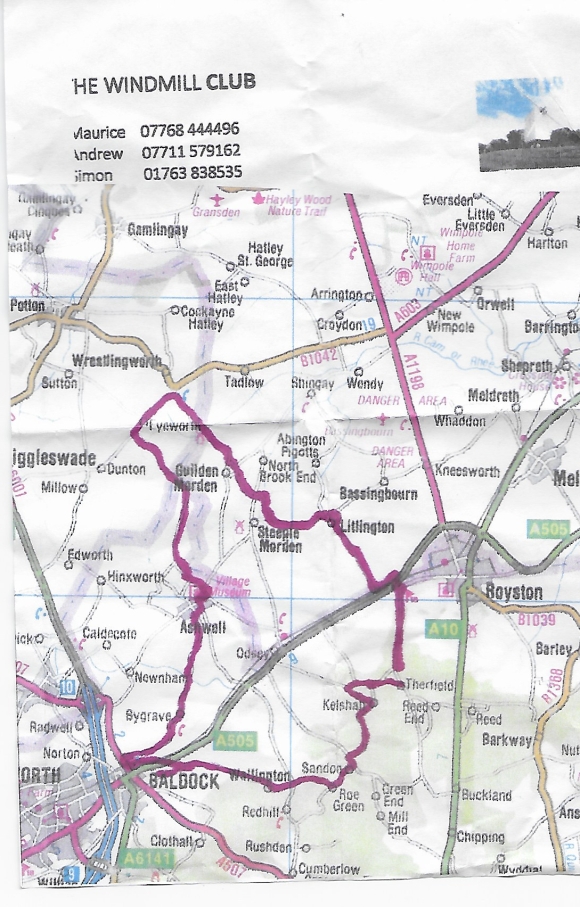 There was indeed a breeze in our favour on the outward leg which meant we swept along, clocking up an average speed close to that achieved the previous Monday. The route through to Baldock is very pretty, particularly the village of Wallington which was once the home of George Orwell, author of Animal Farm.

And here are the animals and humans (minus Napoleon and Vernon the horse) outside George Orwell’s cottage:

For more information about George Orwell and Animal Farm, here’s a link: https://en.wikipedia.org/wiki/Animal_Farm .

The animals and humans then left in single file, speeding down the long descent to Baldock before heading north east towards Ashwell for coffee at Rhubarb & Mustard. The breeze seemed to be still in our favour.

After coffee we sailed downwind towards Wrestlingworth before finally turning for home, when the breeze became a full on near gale on the nose, reminiscent of some past rides organised by Storm (Pinkeye) Sandra. The imposing Litlington church was passed on the way:

The peloton thinned out and by the time we reached the A505 there was some distance between the front and back. A slow climb up the hill to Therfield, hoping that a golf ball would not impede progress, was finally rewarded by the welcome sight of The Fox and Duck and a welcome birthday pint courtesy of Keith (thanks Keith!) sitting outside in the hot sunshine before having a splendid lunch inside.

Thanks to Maurice for planning the route and to Andrew for getting us to the starting line on time. And congratulations to Sandra, Ric and Graham for clocking up many additional miles by riding to and from The Fox & Duck.