It was a magnificent Suffolk morning as a baker’s dozen of Windmillers gathered at The Packhorse in Moulton on a Newmarket race day. Driving past the gallops from Newmarket to Moulton watching the horses in training is always a special sight and on this crisp sunny autumnal day it was extra special. 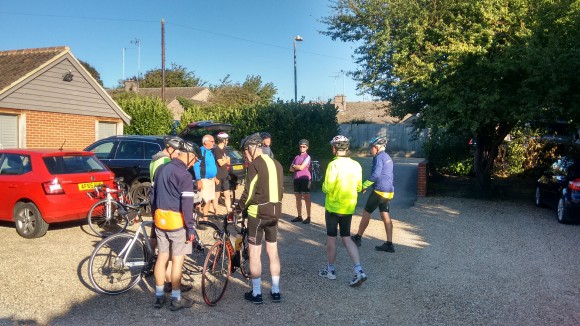 We nearly filled the car park as Maurice, Andrew, Vernon, Sandra, Keith (still recovering from a bug), Ken, Lawrence, Chris, Roger, Victor, Simon, Deborah and Martin got ready for the off, knowing also that Ric would be cycling over from Harston and joining us for lunch. Simon had to firstly mend a puncture – possibly caused by the same thorn / flint on Keith’s driveway that caused Martin’s puncture on Monday? Maurice distributed a map and off we went, not knowing that the actual route might be somewhat different.

This is where we were meant to go:

…and this is where we actually went:

The main variation was a scenic detour into the suburbs of Bury St Edmunds followed by a U-turn and a  stretch along a busy A road but other than this the lanes were fairly quiet. Not long after starting, however, an overtaking car, just before a bend, forced a fast oncoming car to take quick evasive action on to the verge which avoided an accident. Which all goes to show how careful Windmillers need to be at all times, particularly when cycling in a large group.

Our coffee destination was Ickworth, but not the café in the grounds. Every now and then Windmillers like to splash out and so it was the hotel that Maurice had booked us into, where we enjoyed our coffees sitting outside in a magnificent garden in warm sunshine:

The Suffolk countryside was in fine fettle, post-harvest. As always, there were some fascinating churches, cottages and fine country houses to admire as we pedalled along.

And this one too:

Knowing that lunch was to be served promptly at 1.00pm some of the group charged on ahead whilst others were content with admiring the views. But on reaching Moulton there was a large group on the fine bridge desperate to be caught on camera:

A treat was in store back at The Packhorse, our second upmarket eating establishment of the day. An earlier photo shoot had left cocktails all over the bar that needed drinking up, and who better to oblige than a gang of thirsty Windmillers?

Then we sat down in a large private room and enjoyed a Wherry good lunch, joined by Ric who once again gets the prize for the longest ride of the day – approx. 45 miles from Harston and back. Well done, Ric.

Thanks, Maurice, for organising the Lost Tribe and getting us back for a splendid lunch bang on time. And Andrew too for getting us to the starting line. Let’s try a greasy spoon next week.