An earlier start of 4.30pm was necessary today due to the shorter days creeping in slowly but surely. As long as The Bull was open at the end of the ride, that’s all that really mattered, which indeed it was.

It was good to have another new member join us, Jenny, a friend of also new member Deborah. Welcome Jenny! Accompanied by electric Maurice, Andrew, Sandra, Keith, Simon and Martin, we set off at a brisk pace to get some warmth flowing into those brave enough to display knobbly knees. Here is the route taken: 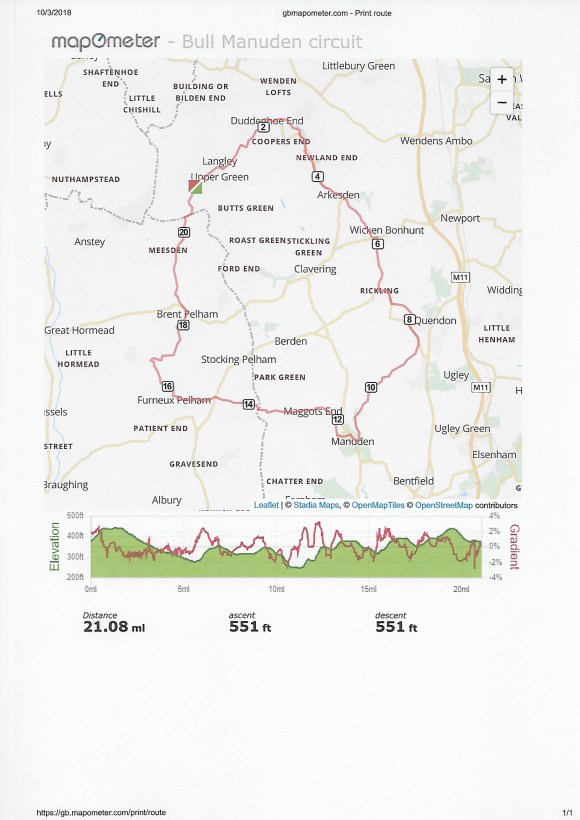 The route took us down Andrew’s favourite off road / track past Rockell’s Farm in Duddenhoe End and on to Rickling and Rickling Green. The lanes were quite busy for a while, this being rush hour, but it soon settled down to the usual peace and quiet we have become accustomed to. Then on to Manuden where it was tempting to stop at Martin’s daughter’s house but baby Willow was busy watching Cbeebies with her dad before tea and might just have wondered what Grandpa’s hi-viz friends were up to on what would have been a lightning visit.

Maurice had a devious off-road / track section planned in Furneux Pelham but before that we just had to pay homage to the gleaners of yesteryear who are said to be responsible for the inscription on the village church of Times Flies – Mind Your Business . Gleaners were apparently allowed onto harvest fields after work had finished, strictly at 6 pm.

Time was indeed flying – 6 o’clock meant it was opening time at The Bull – and so on we sped up the track and down a bumpy concrete bit towards another Pelham, Brent this time, before finally zooming downhill to Lower Langley. Saying farewell to Deborah and Jenny, the remaining Windmillers received a warm welcome inside The Bull.

Thanks, Maurice, for another entertaining ride and to Andrew for getting us there and supplying the photo.