A cold but sunny November morning saw hardy Windmillers gathering in the car park of The Rising Sun at Halls Green, Hertfordshire; a new venue, suggested by Vernon.

Maurice had mapped out a new route, a 28 mile circuit around Stevenage. Joining him were Ken and Martin – looking spry despite yesterday’s heavy session of beer and curry at the Steele-Bodger game – Vernon, Sandra, Lawrence, John T, John B and Brian; nine Windmillers in all.

Setting off westwards we headed for the quaintly named villages of Great Wymondley, Poynders End and St Pauls Walden, huffing and puffing our way over the rolling terrain; these hills were bigger than the ones on our side of Hertfordshire. Sandra, however, was in her element, overtaking on the ascents and waiting patiently at the top for the rest of us to catch up. 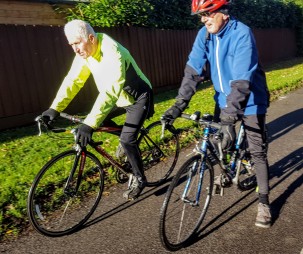 Arriving in Whitwell, we pulled in for some well earned refreshment at Emily’s Tea Shop, a delightful old barn of a place in the middle of a busy farmyard. Surveying the fine selection of cakes, most opted for the richly fruited scones with clotted cream and jam, while Sandra looked on enviously – being in training for the coming weekend’s 75 mile Sportive at Thetford. No cake for her.

The gang at Emily’s

Then it was back on the bikes for the return leg – via Codicote, Datchworth and Walkern – to The Rising Sun, arriving in good time for a pint and a hearty lunch.

As usual there was a mix up over Vernon’s lunch order; what is with him that seems to confuse kitchen staff, we wondered? And Lawrence, our resident chorister, was on larynx-friendly soft drinks in preparation for his forthcoming performance at Saffron Hall.

Thanks, Maurice, for organising and leading us around another lovely route.

[…] And then to cap it all, a lovely surprise – Vernon turned up, accompanied by wife Moira. We hadn’t seen our old pal for a long time so it was particularly good to catch up with him again. Indeed, it was Vernon himself who first introduced us to The Rising Sun three years ago; you can read all about it here. […]