Eight Windmillers set off early today to commence a ride at 10.30am from The Royal Oak, Laxfield, in deepest Suffolk, owned by Simon and Ollie of The Pheasant. Maurice set off even earlier to stock up on fresh Aldeburgh croissants which were awaiting the peloton when they descended on his lovely Shrimp Cottage at the half way point, after 20 miles. The other Windmillers were Deputy Dawg Andrew, John B, Wee Jimny Ken, Half scone Keith, Marmite Tom, Brummie Brian and Moley Martin (bubbling with news of having just caught one). 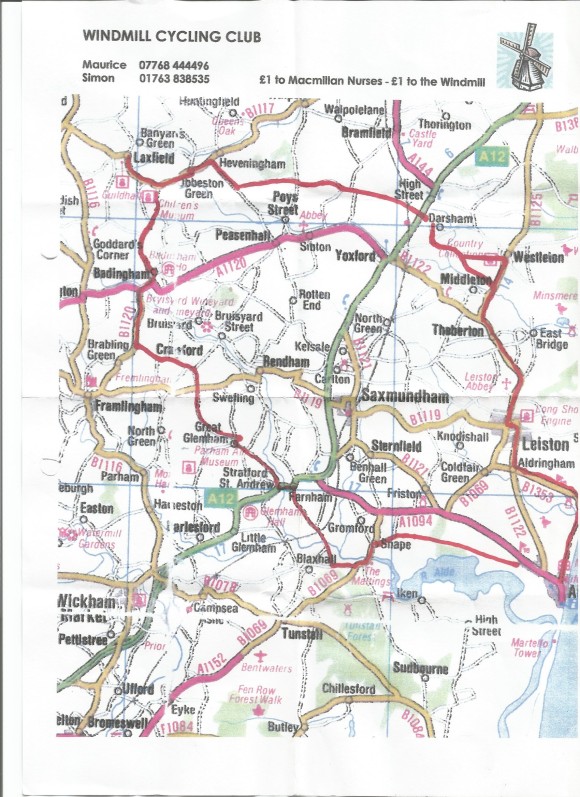 En route to Aldeburgh, the gang cycled through the peaceful villages of Darsham, Westleton and Middleton before stopping briefly in Leiston to visit The Long Shop Museum where Richard Garrett and Sons was once a manufacturer of agricultural machinery, steam engines, fire engines, trolleybuses and military equipment – well worth a stop of an hour or more to soak up the heritage of Victorian and early 20th century engineering.

More big guns in Middleton, where the famous Tin Man sculpture in stainless steel is beside the road welcoming visitors:

Then it was Thorpeness and a heads down ride along the seafront to Aldeburgh in a strong headwind before a welcome stop for coffee, beer and croissants in Shrimp Cottage, courtesy of Maurice.

Suitably refreshed, the 21 mile return trip started with an off-road Aldeburgh to Snape section, known as Kell Lane following Kell’s mishap last year, comprising sandy stretches, raised paths through water meadows and delightful forest paths. All went smoothly, however, with no one falling off but shortly afterwards Brian announced that he had a puncture which could well have been caused by the off road section. Moley’s pliers came in useful extracting a sharp piece of metal from Brian’s outer tyre but the 4 min target for a change of tube was not exactly achieved…………….

But before long we were whizzing through the lanes again and The Royal Oak hoved into view at 3.30pm where some fine Wherry, sandwiches and baguettes were waiting for us.

Laxfield is a lovely village and before leaving there was time to visit the adjacent All Saints Church: 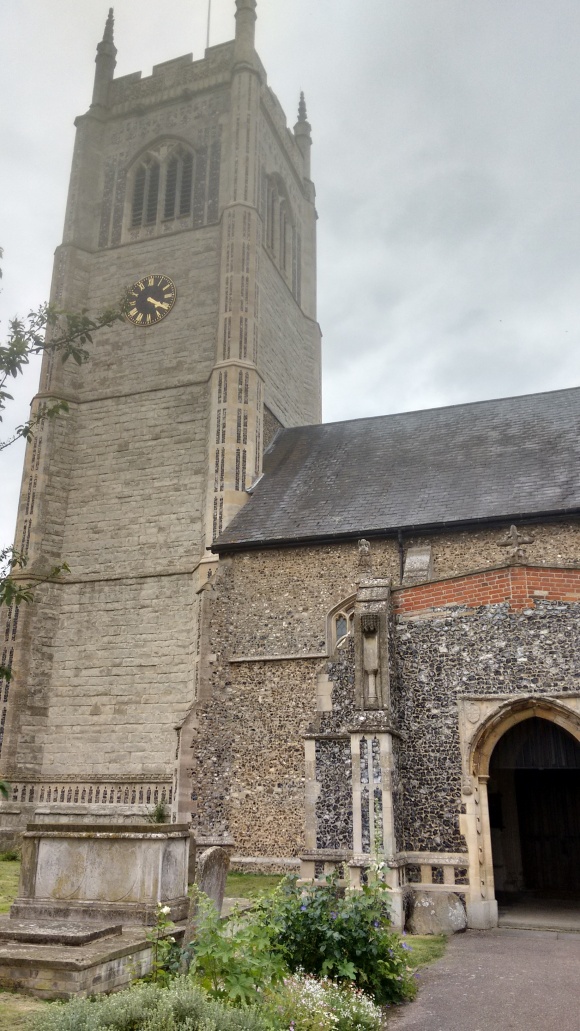 …with its unique scissor beam roof, one of the widest in Suffolk:

Finally, what should pull up in front of The Royal Oak to collect a member of staff but this splendid Cadillac in showroom condition (purchased quite recently in Holland):

Thanks, Maurice, for a great ride and for your hospitality at Shrimp Cottage.

One reply on “7 July. 41 miles through Suffolk lanes”

Thanks Martin, Your photograph of the Caddy made it look shorter than it was, and the pot bellies larger!! Ken