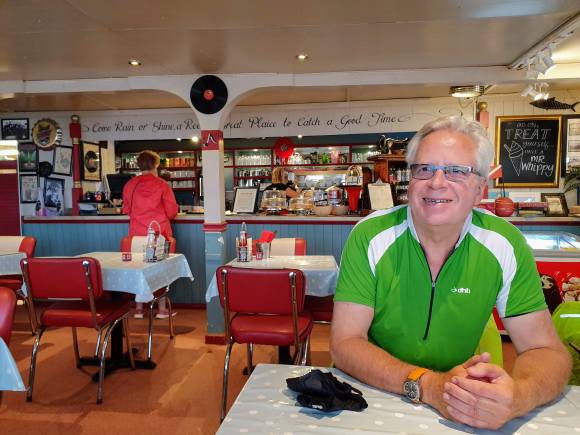 The corny sign above the counter in The Ferry Café at Felixstowe Ferry could not have been a better summary of this ride across Suffolk on a wet and sunny day. Who would have known that smiling Andrew was looking like a drowned dawg only a few minutes before Brian took the above photo? 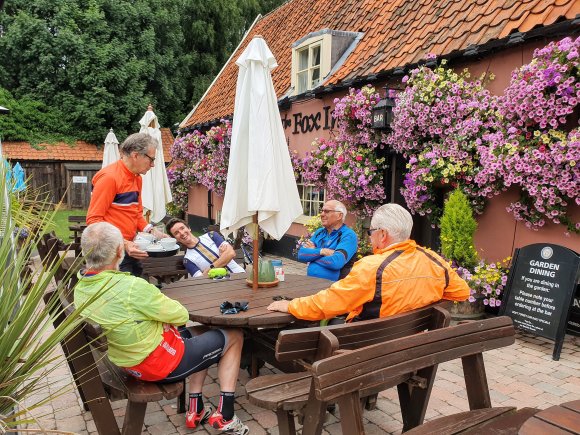 Starting off from The Fox at Newbourne, betwixt Woodbridge and Felixstowe, seven Windmillers comprising Maurice, Andrew, Sandra, Brian, Graham, Howard and Martin, the weather was at first cloudy and dry but having driven through rain on the way over it was surely only a matter of time before it reached the East coast. And sure enough it did, just as we were on top of an exposed Deben riverbank before reaching Felixstowe Ferry. (This was the route we discovered a few weeks back when we had to do a U-turn as the ferry was not running and return to Newbourne.) So jackets were hastily put on but we soon pulled up in front of The Ferry Café to dry out and enjoy a coffee.

From quiet Bawdsey onwards the rain became more of a steady drizzle as we meandered through Suffolk lanes en route to Butley and Orford, stopping in Capel St Andrew so that Andrew could once again shake the hand of Saint Andrew himself, confessing his sins as he did so.

Another brief stop was made at Butley to view the estuary and then it was on to Orford for lunch in The King’s Head where we were greeted warmly by the landlord and Maurice’s friend Chris and his wife Judith who were holidaying in Aldeburgh. Much steam was produced as jackets were taken off to dry out, followed by an excellent lunch washed down with fine beer, courtesy of Chris and Sandra, whose birthday we celebrated. Happy Birthday Sandra!

After lunch it was off to Woodbridge via Rendlesham Forest, into the wind, but we saw some sun too. The group spread out a bit resulting in some reaching The Tide Mill in Woodbridge before the others, and Martin deciding to head directly to Newbourne due to an evening engagement.

And here is the route taken:

Despite the weather at times it was a great ride. Thanks as usual to Maurice for organising it, Andrew for getting us to the starting line on time and Brian for the pics.