The promised chips at The Tally Ho! finally materialised when bowlfuls galore appeared from Saleesha’s kitchen at the end of this glorious late afternoon Spring ride. Ready to gorge on them were Maurice, Andrew, Sandra, Keith, new boy Peter and Martin. We had met Peter before when he was doing a stint behind the bar of The Tally Ho! whilst Saleesha was away and so it was very good to have him join us. Peter’s wife, Maggie, also rides, both of them having cycled 20 miles earlier in the day.

And so it was that the assembled crew set off at 4.00pm to enjoy the local lanes. Here is the clockwise route taken: 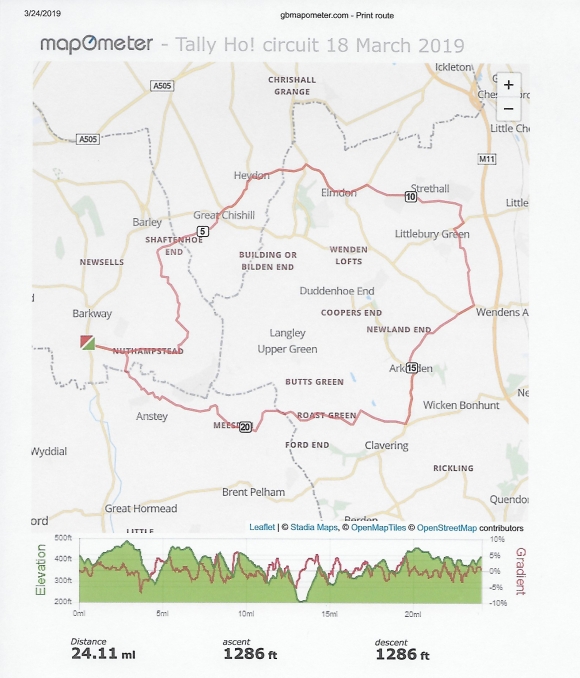 Maurice led the way at a brisk pace and it wasn’t long before the three hills leading to Great Chishill were despatched, helped by a following wind. The views towards Great Chishill windmill (‘our’ windmill) and beyond were at their best in the afternoon sun.

Maurice fancied trying the new off road route between Elmdon and Strethall which he had heard good reports of when we did it without him recently in the opposite direction, and so off we went in the Ickleton direction before turning right up quite a steep hill to the start of the newly laid track through Elmdon woods. And it wasn’t a disappointment – a bit stony here and there, to be expected, but a pleasant diversion from the usual on-road route to Strethall. In a few week’s time the woods will be ablaze with bluebells.

In Strethall,  Andrew stopped to admire a Fox Red Labrador puppy out for a walk with its owners, and to discuss its parentage – no relation to his dog it seems.

Next stop was probably the most-photographed place in this blog – Arkesden – and deservedly so as it must rank as one of the prettiest villages around. It was looking particularly nice this evening with the stream alongside the High Street flowing well, flanked by daffodils on the banks. 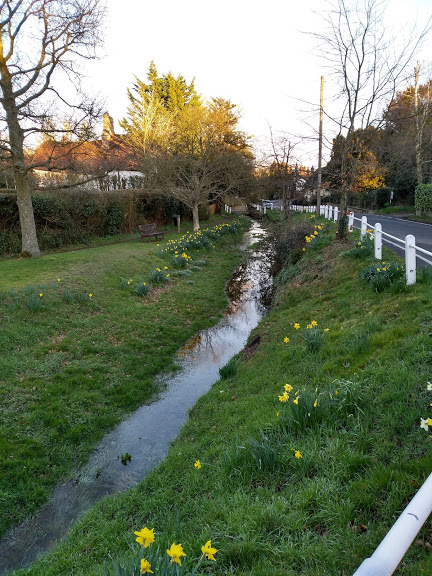 Thoughts of chips and beer must have encouraged Sandra, Keith and Peter to charge off at high speed soon after Roast Green, leaving Maurice, Andrew and Martin to bring up the rear at a more sedate pace. But we were all rewarded with excellent chips and, of course, excellent Trelawney too. It was good to meet Peter’s wife Maggie again and we hope she may join us on a future ride.

Thanks to Maurice for taking us off the beaten track and to Andrew for organising us.