It was gloomy only due to the time of year, not for any other reason, as four Windmillers in good spirits assembled in the Tally Ho! car park in Barkway at 2.30pm for what proved also to be quite a chilly 17 mile ride around the lanes. Maurice led the way followed by faithful Dawg Andrew, Deborah and Martin. Here is the anti-clockwise route taken: 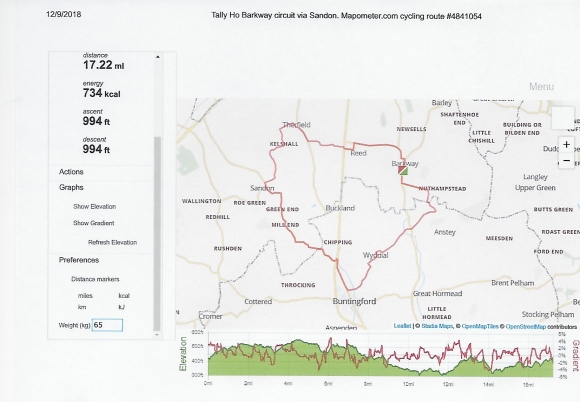 Deborah came well layered, Martin donned ski gloves and both Maurice and Andrew looked as though they had a few layers on but were not admitting it, nor removing them. But Deborah was also minus lights and as it was already gloomy when we set off we agreed to keep her well sandwiched to avoid any possible danger.

It wasn’t long before we all began to feel the heat seeping through and, luckily for Deborah, Martin’s capacious rear bag swallowed two of her layers with space to spare for one of his own.

On we whizzed through Kelshall and on to Sandon, where a brief stop was made to admire the pond, before cycling past Lyn and John Bagrie’s lovely house on the outskirts of Sandon. Then it was down to Buntingford and left to Wyddial where we recalled that memorable vision of loveliness that some of us experienced on a hot summer’s evening earlier in the year – see Blog of 23 July for all the details! Or was it just the heat getting to us?

Less exertion was required on the homeward leg which meant some re-layering on Deborah’s part to keep warm but it wasn’t long before the Tally Ho! came into view. We bid farewell to Deborah, and the remainers (no Brexit pun intended) were then welcomed warmly by Saleesha who opened early specially for us, the log fire already roaring. And what a pleasure it was when Keith joined us along with John and Lyn Bagrie, who we hadn’t seen for a while. Much mirth and merriment was to be had.

Thanks go as usual to Maurice for planning the ride and to his Deputy Dawg Andrew for getting us to the starting line on time.