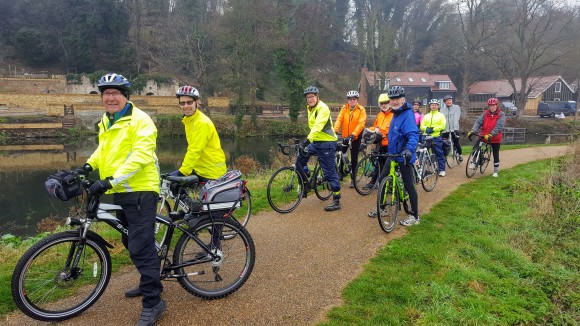 Who were those grizzled men offloading bikes in the pub car park on a cold Thursday morning? Shifty looking types; maybe the Hatton Garden Gang? But then Sandra arrived and all became clear; it was the Windmillers, gathering for their regular weekly outing.

Eleven strong – Maurice, Victor, Martin, Andrew, Rod, Lawrence, Simon, Roger, Bruce, Brian and Sandra – we set off from Westmill heading south towards Ware. There was a wintry edge to the wind and various items of ski wear – mits, thermals, etc – were in evidence. Sandra, having cycled from home, was already warmed up and, together with Rod and Maurice on their whizzy electric bikes – set off at a cracking pace leaving the rest of us trailing in their wake.

Somewhere along the way we managed to lose Martin. There was some debate as to where he was last seen and speculation as to whether he had been distracted taking  a picture of some old church or other. But following a phone call or two – and a judicious short cut on Martin’s part – we caught up with each other again a few miles on.

Pulling in at our regular café on Ware High Street, we ordered coffee and some of us even had a mince pie. ‘ Twas the season, after all. Indeed, Lawrence and Brian were so impressed with said mince pies that they bought more and force fed them to Maurice and Andrew, who agreed they were mighty fine pies.

Restored and back on the bikes, Maurice led the way westwards along the Lea towpath to Hertford where we turned northwards for the return leg via Sacombe and Nastry to Westmill. Arriving back at the Sword Inn Hand, we were delighted to be joined by Ken for lunch.

It had been another excellent Thursday outing. Thanks as ever to Maurice and Andrew for organising everything.