Sandra’s report of trusty steeds on 17 September reminded me that speedy steeds had an interesting circuit from The Bull in Lower Langley on 3 September, which had not been blogged. 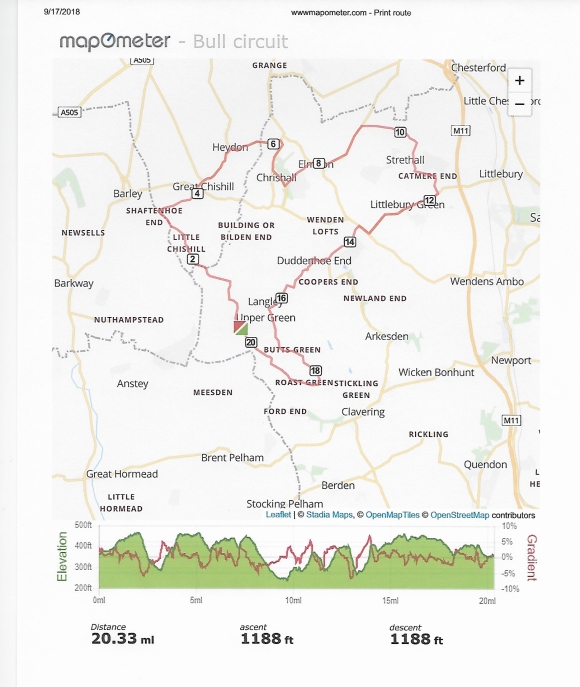 It was Andrew, Keith and Martin who set off on yet another glorious evening circuit only to find at the end that John B had been doing much the same in the opposite direction, having started a bit later, but never the twain did meet until back at The Bull. Instead of going directly from Heydon to Elmdon, Martin introduced a new off road but relatively smooth path from Chrishall to Elmdon which runs through the woods (wonderful smells at bluebell time).  Interesting to see that the trusty steeds did it again in reverse.

Whilst climbing up to Catmere End, Martin noticed a sprayer busy spraying and in the interests of photography and sprayer identification by Tom at some future stage, he stopped to take pics, whilst the others went ahead and waited. It wasn’t long before the driver stopped his sprayer and sauntered over to ask if there was anything wrong. ‘Nothing at all’, wimpered Martin, thankful that he was not about to crush his bike and as soon as Tom’s name was mentioned he melted into a long discussion about nozzles and weeds, demonstrating what he was trying to eradicate. Meanwhile, Andrew and Keith were worrying about Martin’s safety but showing no signs of intervening.

Sprayer at Catmere End in need of identification by Tom

Then the speedsters got going, Andrew and Martin recording their best ever top speed of 33.4 mph descending the long hill from Littlebury Green.

Not long afterwards, we came across a recently torched / burnt out Land Rover Discovery on the side of a field leading up to Duddenhoe End. The heat had been so intense that all the glass had melted into pools and nothing was left except the shell. Quite a sight:

Finally, we wended our way through the lanes taking a left at Langley Upper Green which meant delaying a pint by another 10 minutes but adding a couple of miles to the ride and enjoying the countryside.

And then we were soon back at The Bull sampling a pint of Benny’s Best, still not knowing where it is brewed and all the staff refusing to tell us. But it’s a fine pint.

Thanks, Andrew, for organising a great circuit. Apologies for the delay in reporting.