Just 5 weeks after his hip operation, Maurice was back on a bike, albeit an electric one courtesy of Ann Worthing. This must surely rank as one of the fastest recoveries known in the history of hip transplants?

And so it was that 10 Windmillers gathered at a new starting point, the Eight Bells at Abbotsley near St Neots. Accompanying Maurice were Andrew, Sandra, Keith, Rod, Chris, Brummie Brian, Yorkie Brian, Roger and Martin, freshly back from his trip down the west coast of France. Having adjusted Ann’s bike to ensure the all important 90° angle between torso and legs (on doctor’s orders) Maurice roared away from the pub leaving the others struggling to keep up.

This is the route taken by all except Maurice: 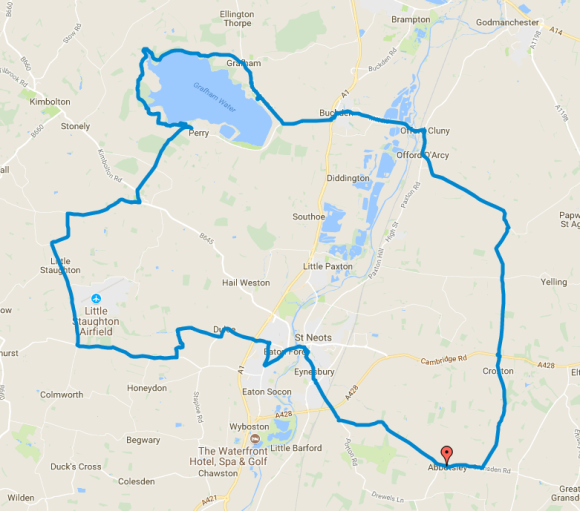 Maurice thought he was setting an easy pace but it wasn’t until some traffic lights in St Neots that the gasping peloton finally caught him up when a U-turn was required before  negotiating a tricky river crossing and then going the wrong way around the Market Square, much to the notice of local townsfolk. So it was a question of getting out of town fast and that is indeed what Maurice continued to do.

Once under the A1, the roads got a little quieter and it wasn’t long before we reached Perry on the shores of Graffham Water after about 16 miles. At this point Maurice decided wisely that a 6 mile section of off-road riding around Graffham Water might not be what his consultant had in mind and so he pedalled on anti-clockwise to a café further round the shore whilst the rest of us continued at a blistering pace on the narrow and bumpy track in a clockwise direction. Funny how Maurice’s influence continued, or was it the thought of coffee and cakes that kept us whizzing along?

As it happens, the peloton got to the café not long after Maurice and so we suspected he had switched the controls of Ann’s bike from ‘sport’ to ‘normal’ to conserve battery power for the homeward leg.

The return leg took us again under the A1 at Buckden, passing a delightful church on the way:

Buckden was clearly a major stopping off point for travellers on the Great North Road – Buckden Towers was the 5 star place used frequently by bishops and royalty.

Maurice’s speed back wasn’t quite as fast, which enabled Roger, Sandra, Brian and other speedsters to overtake him at times but towards the end when he realised that the impressive battery still had 28% of its charge left he appeared to revert to sport mode and charged off again. However, despite the assistance of a battery, there is still a considerable amount of effort needed to pedal an electric bike and so it is truly remarkable what Maurice achieved on his first day back in the saddle for 5 weeks. Well done! And well done, too, to Rod who continues to make a great recovery and who is fighting fit again. But hauling Rod back from disappearing up the wrong road continues to exercise our vocal chords at times.

There was a warm welcome back at the Eight Bells and a good lunch was had in the garden.

Thanks, Maurice, for leading the way. It’s good to have you back. And thanks to Andrew for organising us and to B Brian for the Strava map and a pic.

P.S. If anyone would like to read of our exploits and the food and wine consumed by me and my chum Dick on our recent French ride, it’s all here: https://martinwoodheadsblog.wordpress.com