Why do bike incidents come along like no. 11 buses? We can go for weeks at a time without even a puncture but then everything goes wrong all at once. This was just one of those days but we all survived even if we did go our separate ways at times. At least it didn’t rain, which is what happened the last time we ventured out into the Fens.

There was a large gathering in the Trumpington Park & Ride at 9.30am prior to Maurice’s planned trip to Downham Market and back to Cambridge by train. Andrew, John B, John T, Sandra, Keith, Brian, Lawrence and Martin were all there too but where was Vernon? A call came through saying he had discovered a puncture before setting off but would be with us shortly. At 10.00 am another call from Vernon brought the unwelcome news that the 2m high barrier into the car park had sliced into his bike atop his car which sent the peloton rushing to his aid. Astonishingly, the bike was almost unscathed but the roof rack had slid gracefully and scratchfully down the back of his car. It didn’t take long to pick up the pieces, bend the brake levers back in place and we were soon whizzing along beside the busway en route to Downham Market, or so we thought. The red line shows the planned route and the green the green route. 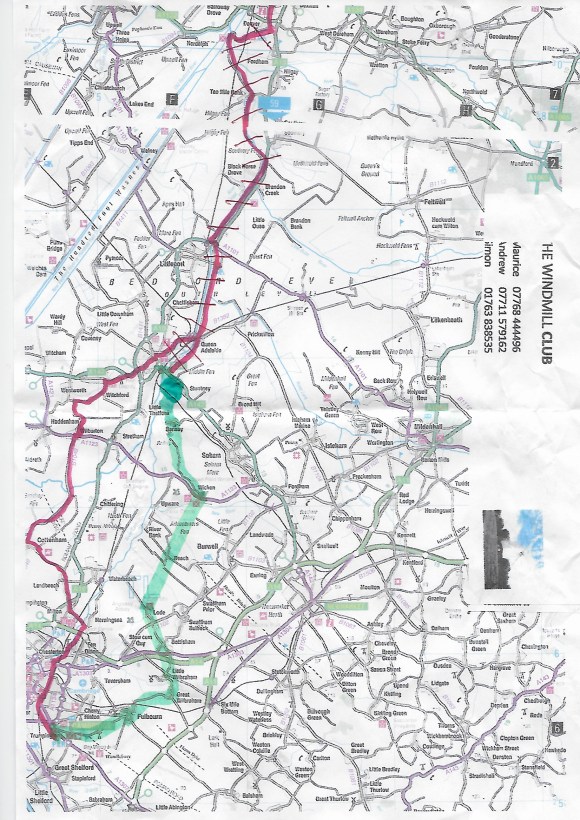 Thanks to Brian’s expert knowledge of the lanes and pubs around Mill Road, we sailed through Cambridge and on to the tow path alongside the Cam heading upriver. The path was muddy and slippery in places, as Vernon discovered at one stage, but got better as we got closer to Baits Bite lock where the first breather was taken.

A left turn to Milton and across the busy A10 to Landbeach went smoothly until the Reverend Moley Martin announced ‘puncture’ in a shrill voice, appropriately enough opposite the church in Cottenham. He chose the driveway of The Rectory to carry out the repair assisted by nurses Rusack and Naylor, only to discover after 10 minutes of fitting that his spare tube would not inflate due to leaks around poorly placed patches over previous punctures, or ppppp for short. Brian came to the rescue with a new tube and after another 10 minutes whilst the remainder of the peloton talked patiently amongst themselves, planning how to hang Martin with his own tube from a high tree in the churchyard, all was done.

By this time thoughts of reaching Downham Market began to create doubt but 9 Windmillers shot off at high speed allowing Martin to pick up his bits and pieces and follow behind, only to result in a loud bang from his back tyre after just 200 yards…… Having no more tubes he called nurse Rusack who nobly returned to help whilst the others carried on towards Ely. Brian’s tube had exploded without reason underneath the valve but luckily Andrew had a spare and so after removing the wheel for the third time and inserting yet another tube, this time successfully, the tail enders also set off for Ely to find the others, who were suitably holed up in The Cutter Inn on the river thinking of having lunch and giving up on ever getting to Downham Market. But the pub service was not good and so half the gang decided to head to the station, catch the train and have lunch in Cambridge whilst the other half decided to cycle back via the Sustrans Route 11 across the Fens via Wicken which had been done once before.

Those who cycled back, Andrew, John B, Vernon, Lawrence and Martin, enjoyed a lovely picturesque ride across the Fens with its big skies. At Wicken there was a lunch stop at the Docky Café (an ex-tractor shed so called because agricultural workers had their pay docked there for taking time off for lunch) which John B declined as he thought it was not licensed but it produced not only a fine lunch but had a good range of bottled beers too. Meanwhile, the others were enjoying a nice lunch in The Kingston Arms in Cambridge which stocks a fine range of real ales. No wonder they headed there.

So it was four Windmillers that continued on via Burwell Fen and on towards Lode and Bottisham, passing on the way a large herd of Polish wild horses that were introduced in 2003, called Koniks. These are generally no larger than 13 hands but perhaps due to the rich Fen pasture some looked a bit larger.

From Bottisham we continued via Great Wilbraham and Fulbourn expecting to catch up with John B again but he had clearly got ahead of us. In Fulbourn Vernon decided to stop off at a friend’s house leaving just 3 Windmillers to return to Trumpington via the Gogs and Addenbrookes, clocking up 53.5 miles in total (55 in the case of nurse Rusack). Those who let the train take the strain and lunched in Cambridge clocked up a few less.

Thanks go to Maurice for planning the route to Downham Market but apologies from those responsible for not making it possible, and thanks to nurses Rusack and Naylor for their assistance in the operating theatre.

One reply on “19 October. Incidents in the Fens. Various miles.”

[…] memorable mendings; the most notable of which include the one outside the Blackwall Tunnel and the one at the vicarage in Comberton. Check them […]