A fine spring day, but quite nippy to start with, saw ten Windmillers assemble at Newmarket Station to catch the 10.05 to Stowmarket, or so they thought. With such a large gathering, would the driver allow ten bikes on the train? So five members went to one end of the platform with their bikes, hoping the driver would not see them, whilst the others went to the other end and showed themselves. Would it be a one coach train and might we get turfed off anyway for not having tickets, the machine on the platform being out of order? Might we have to abandon the ride as planned? The stress levels built ever higher but there was much relief when an almost empty two coach train pulled in on time, the driver smiled and we all piled on board. It also had a conductor, Southern Region-style, and he was happy to dispense tickets to Maurice at a special group price, except that Brian had bought his online the day before at the same price and proudly showed his e-ticket to the conductor.

The journey through the Suffolk countryside was uneventful until we reached Elmswell, the last stop before Stowmarket, when the driver announced that the train was going no further due to a points failure further up the line. Smugly, the Windmillers said farewell to the other passengers, the driver and conductor, alighted the train with their bikes and set off on a revised route that Maurice had quickly devised to meet up with the planned route at Rattlesden.

As well as our leader Maurice and blogger Brian, the others were Andrew, Vernon, Ken, Keith, Sandra, Tom, Lawrence and Moley Martin. Once we had discovered which exit to take at the nearby A14 roundabout junction, we were soon in Rattlesden and then headed due West through delightful lanes and villages, passing imposing Suffolk churches and timbered buildings too numerous to photograph. 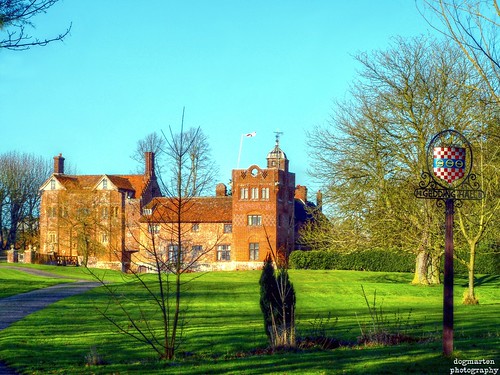 After crossing the busy A134 at Sicklesmere, Maurice went one way to the coffee stop in Hawkstead whilst the others went a different way, witnessing a near pile up en route when a large lorry tried to overtake us, forcing oncoming traffic to mount the kerb. Thankfully we all survived.

Maglia Rosso is an amazing bike shop /  cafe, seemingly in a very remote spot but only 2-3 miles outside Bury St Edmunds. A former pub, it has been transformed into a state of the art bike depot, serves very good coffee and retains a beer licence – what more could a cyclist wish for?

Time was getting on and with thoughts of missing lunch at The Packhorse in Moulton we sped on westwards assisted by a strong tailwind passing through yet more attractive villages such as Chevington and Dalham. Tom, however, had a puncture just outside Moulton but pre-ordered his favourite buffalo wings and proceeded to break the club record for mending a rear wheel puncture in a claimed 5 minutes, witnessed by Brian.

We skidded into The Packhorse car park just before 2.00pm, thirsty and hungry, only to be told that last orders was not until 2.30pm. Phew! So, relaxation took hold as we enjoyed an excellent lunch and sampled some excellent beers around a large table:

A short hill out of Moulton to the top of the gallops at Newmarket and a fast downhill cruise into the town centre ended an eventful but extremely enjoyable day out in Suffolk.

Thanks again to Maurice for planning and adjusting the ride as dictated by Abellio Greater Anglia, and to Andrew for getting us to the start line on time.