So there we were sipping our coffees in the front room of The Bell Inn, Kersey, when a vintage car went by in a cloud of steam. Being a naturally inquisitive lot, we exited the pub sharpish and, following the steam clouds, found the owner topping up the boiler at the ford that straddles the village High Street. The 1910 Stanley Steamer was his pride and joy and he was more than happy to tell us all about it. Then with a cheery wave he hopped back in and drove off – more or less silently and at quite a lick – up the hill.

This was just one of the many high points on Thursday’s ride, with Ken, Vernon, Keith, John B, Maurice and Brian enjoying a very pleasant run from Long Melford to Acton, Boxford, beautiful Kersey and then on through Chelsworth before stopping for a long lunch at The Swan, Lavenham. 29 miles in all. 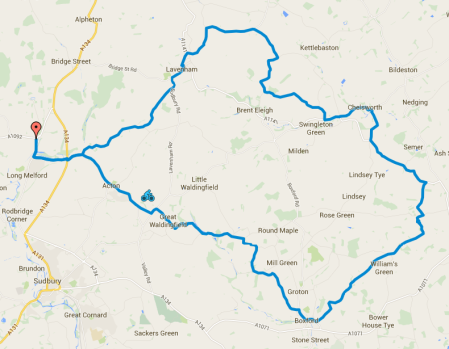 Perhaps the best-known and best-selling steam car was the Stanley Steamer, produced from 1896 to 1924. Between 1899 and 1905, Stanley outsold all gasoline-powered cars, and was second only to the electric cars of the Columbia Automobile Company in the US. It used a compact fire-tube boiler to power a simple double-acting two-cylinder engine. Because of the phenomenal torque available at all engine speeds, the steam car’s engine was typically geared directly to the rear axle, with no clutch or variable speed transmission required. Until 1914, Stanley steam cars vented their exhaust steam directly to the atmosphere, necessitating frequent refilling of the water tank; after 1914, all Stanleys were fitted with a condenser, which considerably reduced their water consumption.

In 1906 the Land Speed Record was broken by a Stanley steam car, piloted by Fred Marriott, which achieved 127 mph (204 km/h) at Ormond Beach, Florida. This annual week-long “Speed Week” was the forerunner of today’s Daytona 500. This record was not exceeded by any car until 1910.