Maurice devised a cunning route on this warm summer’s evening which involved a half way stop at Simon and Ollie’s house in Elmdon, where Simon had very kindly offered to show off his new outdoor bar to members of the Windmill Club. As a result, eight thirsty Windmillers gathered outside The Bull at Lower Langley for a 20 mile ride around the lanes, the intention being to call in there also at the end of the ride. So much for good intentions……………

This is where Maurice, Andrew, Rod, Deborah, Simon, Charles, Nick and Martin  intended to go: 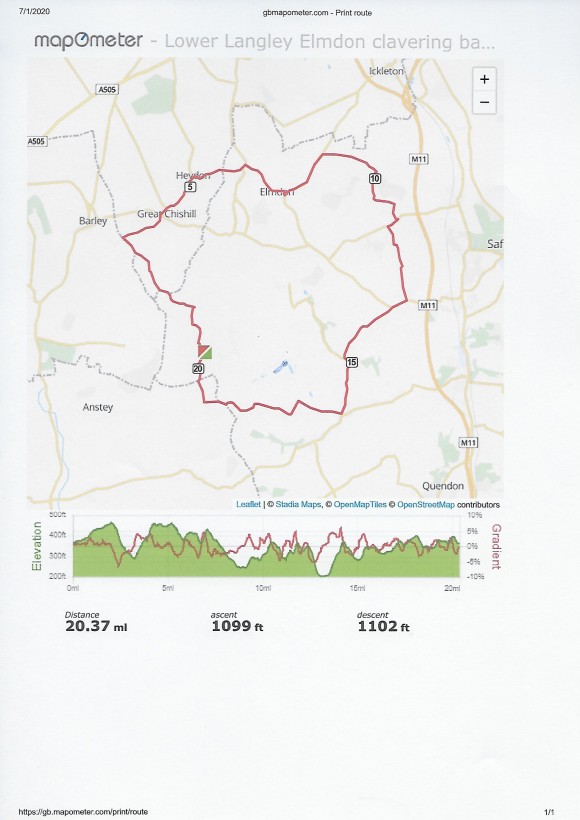 All went swimmingly as far as Elmdon, via Shaftenhoe End, Great Chishill and Heydon with no more than 3 or 4 in a group at any time. Simon and Ollie gave us a warm welcome as we sat in their lovely garden, suitably distanced,  admiring Simon’s new bar from which he generously dispensed beers and soft drinks whilst Ollie distributed nibbles. It was a jolly gathering and time just vanished as we chatted around the table, only to realise eventually that we would be much later than usual getting back to base.

Dragging ourselves away after thanking Simon and Ollie for their kind hospitality, we decided to shave off a mile or so by taking the newly surfaced path through Elmdon wood to Catmere End instead of looping around on the road. 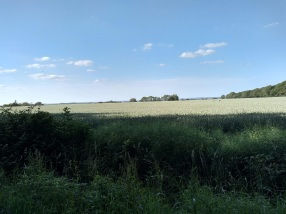 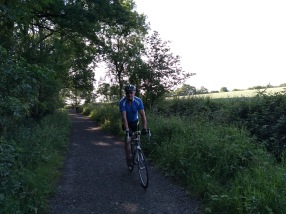 Emerging at Catmere end provided another opportunity for a photocall in the evening sunshine: 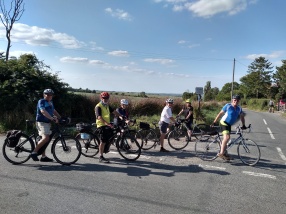 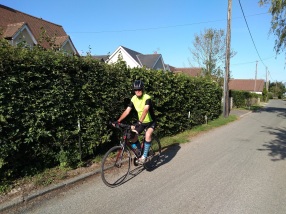 On we went down Hill Bastardo but it was after that when things went a bit awry. The group split up heading towards Arkesden with Maurice out front and Rod bringing up the rear with Charles, but after waiting some time in Arkesden it was clear that something had gone wrong. So Maurice offered to whizz back on his e-bike to try to find Rod and Charles and in the meantime Martin entertained the others with his dove impressions, trying his best to communicate with a dove sitting overhead on a telephone wire, but wisely not directly overhead in case the dove disapproved of the mating call:

Sadly, Rod and Charles had taken a right turn towards Dudddenhoe End and so Maurice missed them and ended up back on the Wendens Ambo road before all decided to make their way separately back to Lower Langley. By this time it was getting quite late and as The Bull had no real ale on offer, all decided to say farewell and head back home.

Thanks to Maurice for devising the route, Andrew for organising us and, once again, Simon and Ollie for their kind hospitality. We all thoroughly approved of Simon’s bar.