A large contingent of Windmillers gathered at Andrew’s house in Wendens Ambo on this fine late summer’s day with just a hint of autumnal nip in the air. And it wasn’t because we knew in advance that it was Nigel’s birthday and that he would be buying the drinks. So, led by Andrew and followed by Maurice (enjoying not being responsible for map reading for a change), Keith, Brian, Ric, Roger, Simon T, Geoff, Deborah, Lawrence, Nigel, Charles and Howard, the group set off in the direction of Hill Bastardo up to Littlebury Green and were met by Ken and Martin who had cycled up from Ickleton, making 15 in all. Is this a Windmill record? Brian and Ric, however, rode from their homes in Shelford and Harston and so clocked up 40+ miles.

This is where we went, clockwise: 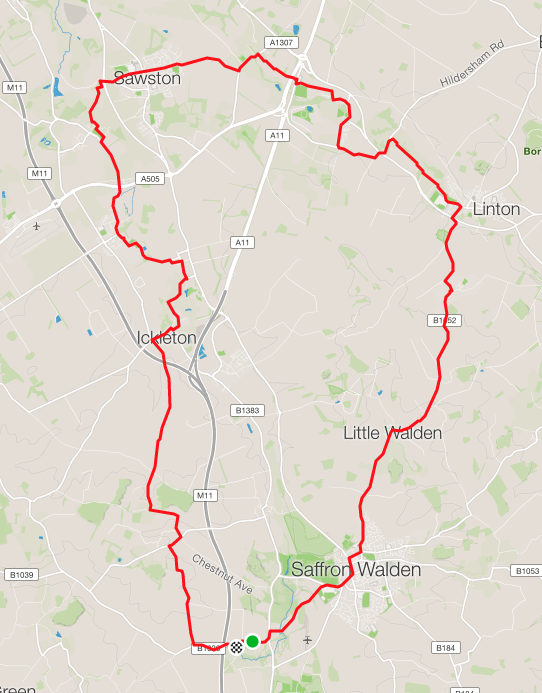 Other than crossing the busy A505 at Duxford, the roads were pleasantly quiet and so there was plenty of time early on to take in big views towards Saffron Walden and Ickleton and admire the neat harvested fields. We had to cross the same railway line three times, which could potentially have meant waiting up to 20 minutes given the new barriers in Ickleton and Sawston but, luckily, we were only held up once. Andrew’s route took us via the bridge over the A11 at Little Abington, where an archaeological dig was being carried out prior to some road changes, and then on to Linton via an off road track from Hildersham. Hoping to see the Jura Comtois horses in action again (having seen them on a previous ride), and the lady in charge, we were disappointed that there was no sign of either. 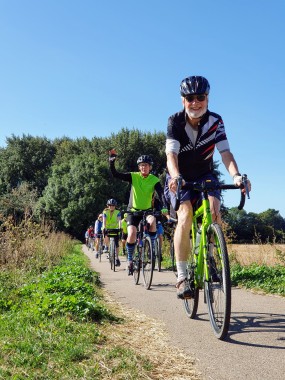 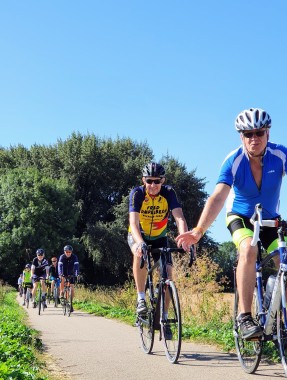 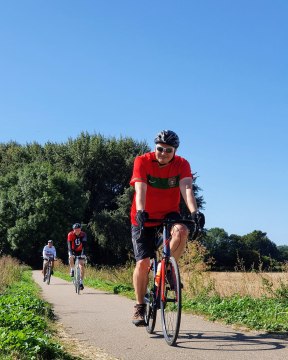 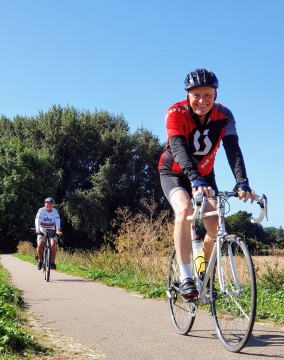 En route from Whittlesford to Sawston,  photos taken by Brian in his usual horizontal pose

The Linton Kitchen is a favourite coffee stop and once again they produced excellent coffee and cakes for hungry Windmillers, whilst imprisoning a few behind bars:

The return leg involved a pleasant climb up through Hadstock and then a fast run down to Little Walden and on to Saffron Walden before enjoying an excellent lunch back at The Bell Inn in Wendens Ambo where we celebrated Nigel’s birthday with a fine rendering of Happy Birthday to You – a Windmill choir in the making, perhaps, but needing some training from choirmeister Lawrence before performing in public. Sadly, Charles could not stay for lunch but bid us farewell with his usual ‘Goodbye, you bastards!’.

A lunchtime bonus, particularly for those of us not having to drive, was to sample the barrels remaining from a beer festival held the previous weekend. And what fine beers they were too!

Thanks go to Andrew for planning and leading the way, Nigel for buying a large round of birthday drinks and Brian for the pics.