Framlingham was to be the start and finish of this delightful ride through Suffolk lanes, but not without an unexpected turn of events. Meeting first in a car park but then heading for The Crown Hotel in the centre of town for a coffee before setting off, Maurice (now Saint Maurice for reasons which shall be explained later) led the way followed by Andrew, Sandra, Ken, Ric, Brian, Tom, Chris, Graham, Mike (a friend of Maurice’s who lives in London and Aldeburgh who we hope we’ll see again) and Martin. This is where we went, clockwise:

Heading out of town we were soon treated to a spectacular view of Framlingham Castle, constructed in the late 12th century by the Bigods, a wealthy Norman family. But despite its design which was meant to withstand long sieges it was captured by King John in 1215, even though he and the Bigods had been best mates and had dined together in 1213. However, they must have made up as the castle was later restored to the Bigods but by the end of the 13th century it was decommissioned and became a luxurious home of the dukes of Norfolk for over 400 years before falling into disrepair. It has been used since as a County Court and by what appears to be a division of Dad’s Army during the second world war to resist a potential German invasion. It is now owned by English Heritage.

There was a strong wind blowing inland from the North Sea but we proceeded steadily through winding lanes, sand strewn at times, and past great seas of plastic covering crops such as carrots, onions and asparagus. We saw very few vehicles of any kind even when crossing the A12.

The smell of the sea got stronger as we entered Thorpeness, familar terrritory for Ken as a place to entertain the grandchildren on holiday. Thorpeness was the dream of wealthy Scottish barrister Glencairn Stuart Ogilvie. The idea for the lake, or Meare, which is never more than 3 feet deep, was sparked by one of Ogilvie’s close friends, J.M. Barrie, creator of Peter Pan, who knew the barrister well, and it was Barrie’s tales of the Neverland that inspired him to create the Meare complete with the Pirate’s Lair, Wendy’s Home, and Captain’s House. An eagle-eyed grandchild might even spot a crocodile in between the trees.

By this time, thoughts of the promised brunch ‘n’ beer in Aldeburgh began to take charge and so it was heads down into what was now a strong sea breeze, on the nose, as we cycled south with the sea and Maggi Hambling’s iconic Scallop sculpture on the beach to our left and marshes on our right – a great sight and seemingly always wind blown. Parking our bikes outside Maurice’s cottage we learnt that the Adnam’s shop had run out of beer but at 11.30am it was a bit early anyway and so we settled down to what turned out to be an excellent brunch in the nearby Aldeburgh Market Café, which Maurice had reserved, where an assortment of poached eggs, scrambled eggs, smoked salmon, kedgeree and kippers were devoured, accompanied by excellent coffee. Definitely a place to revisit.

The homeward leg took us out of Aldeburgh along a bike path and then past Aldeburgh Golf Club with its 18 and 9 hole courses, the latter having wonderful views of the Alde Estuary leading up to Snape. Which is where we were heading but via Maurice’s favourite off road, sandy and sometimes boardwalk track through the woods and across wet and muddy marshes. All was going well until Andrew issued a loud **** as his bike ground to a sudden stop, luckily without throwing him off. His experience of balancing on water skis clearly came in handy. Unfortunately a tiny twig had flipped up into his chain and gears jamming the whole lot together and resulting in the bottom chain wheel and derailleur bracket snapping off completely, a repeat of what had happen a couple of years ago. Luckily, Tom was once again available with his chain shortening gadget and having donned surgical gloves he was soon at work carrying out a major operation to convert Andrew’s bike once again into a fixie. All this seemed to take less time than mending an average Windmiller’s puncture.

All was fine except for one thing. Andrew discovered the next day that he had left behind a key piece of cabling without which it would be difficult to carry out a full repair. Result – call Maurice, still in Aldeburgh, who offered to cycle back to the spot deep in the woods where the breakdown happened and, hey presto, he found the part! So, arise Saint Maurice, you’re a real Saint, and when you eventually get to heaven there’ll be an e-bike waiting for you! RHM has arranged it.

Andrew’s fixie gear had him spinning away like crazy but it was a good gear for negotiating a path down to the River Alde and up towards Snape. The views across the estuary with reeds swaying in the wind were breathless.

The final stretch from Snape took us to Campsea Ashe, across the A12 again (this time on a bridge) and through to Easton where thirsts and appetites were once again taken care of, this time by the friendly staff of The White Horse who said they could oblige with sandwiches even though we arrived on the stroke of 2.30pm when the kitchen normally closes. And good food and beer it was too – definitely another place to revisit, perhaps on a Tuesday when a special Malaysian menu is offered.

Finally, we cycled past the famous crinkle crankle wall surrounding Easton Hall Estate, thought to be the longest such wall in the country, designed for both strength and economy of construction. 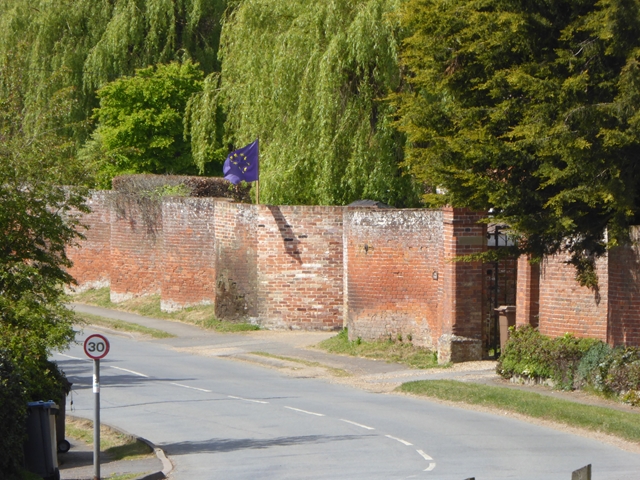 After 37 miles we were back in Framlingham and most were happy to get in their cars and return home but not Graham. What was another 70+ miles he thought? With Sandra edging ever closer to his current mileage of around 2,200 so far this year Graham decided that adding another 70 was a good way of keeping ahead, even if it did mean getting home at around 8.00pm! Well done, Graham. You are both an inspiration to us all. Correction! It was Sandra who was just ahead of Graham. Ed.

Many thanks to Saint Maurice for planning a great ride, Andrew for organising us and Brian for the map and several of the pics.