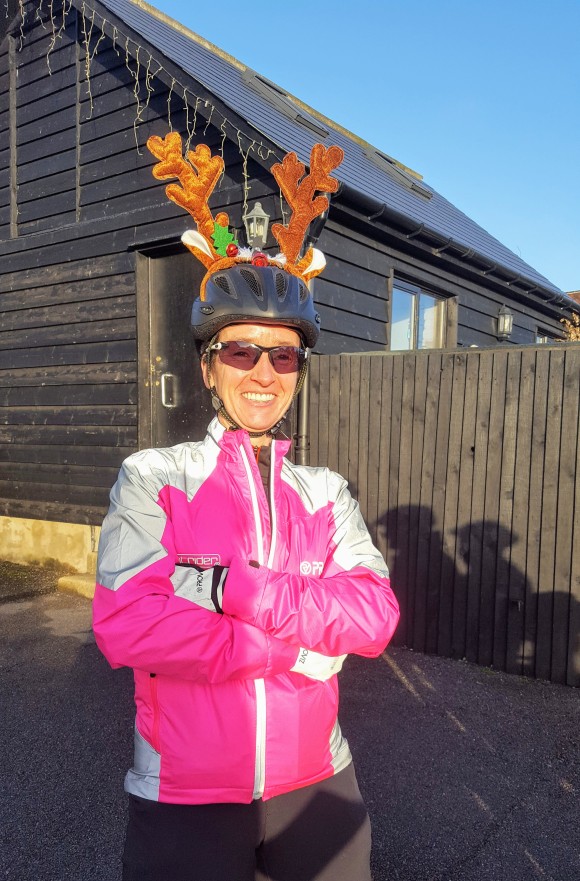 Barely a week had passed before the Windmillers were back at Braughing, gathering once again in the car park of the Golden Fleece. Notable this week were Sandra, in festive headgear, and Peter the Birdwatcher, a new recruit who we had met last Thursday at Amwell Nature Reserve. Joining them were Maurice, Andrew, Vernon, Lawrence, Geoff, Ric, Rod, Keith, Roger, Nigel and two Brians; fourteen Windmillers in all.

It’s not often that we lose riders but somehow – and within minutes of setting off – fourteen became twelve as Peter and Brumme Brian, having missed a turn in Puckeridge, sallied off alone into deepest Hertfordshire.

It was another two hours before we all met up again at Church Farm, Ardeley; Brian and Peter having enjoyed a relaxing 9 mile cruise in the sunshine – whereas Maurice had cracked the whip and driven the others at pace to clock up nearly twice that distance. Brian and Peter were chatting over a second coffee as the main peloton arrived, looking distinctly warm.

Back on the bikes – and now making a special effort to stick together – we completed the 10 mile return leg to The Golden Fleece where Landlord Peter served up another excellent lunch.

Thanks, Maurice and Andrew, for leading the way (even if you did lose a few of us for a while).

A Merry Christmas to all our readers!