Another glorious day was in store as 9 Windmillers descended on to The Henny Swan in Henny Street, situated deep in the Suffolk countryside  alongside the River Stour near Sudbury. Unfortunately, Ken didn’t quite make it in time and so it was Maurice, Andrew, Sandra, Keith, Brummie Brian, Chris, Tom and Martin who set forth on one of Maurice’s dazzling  5-star rides. 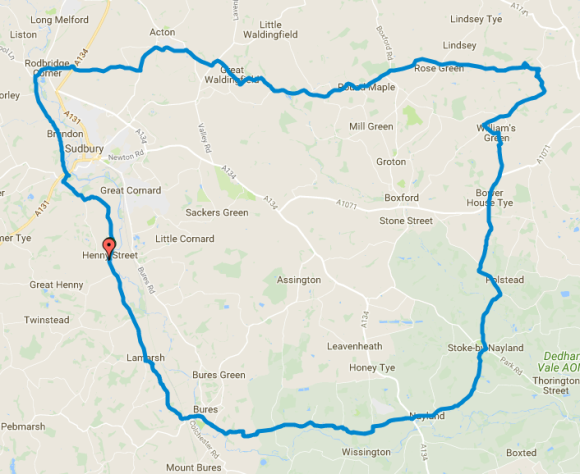 Going in a clockwise direction we soon entered a familiar stretch of disused railway line, skirting Sudbury, which was very pleasant to ride on in dry, shaded conditions. Then it was along quiet roads and lanes, passing many beautiful churches such as this one, St. Lawrence, in Great Waldingfield: 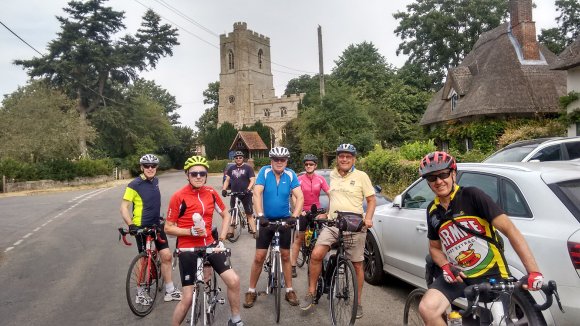 Thoughts of coffee began to occur shortly after this stop, Boxford being the original destination, but it proved difficult to pass through Kersey without stopping at the delightful Bell Inn, where the coffee was superb (and the beers probably not bad either). On the way we had to stop to take in this amazing view of the Suffolk countryside at its best:

There were a surprising number of hills from Kersey onwards but none too challenging, particularly for Maurice who was breezing along once again on Ann Worthing’s electric bike, albeit in eco mode in order to gain more muscle strength for when he rides battery free once again, continuing his amazingly quick recovery from his hip op. Well done, Maurice!

Other than a pause for Andrew to pick up a road-kill onion on the side of the road, the return leg to Henny Street was uneventful, but passing a pub rated as having 5 stars seemed to sum up the ride perfectly. The Swan was heaving with customers, some of whom had travelled down from Sudbury on the pub’s own electric boat, the John Constable, but once the drinks had been served we could relax and have a pleasant lunch outside in the shade. Ken joined us having done his own tour of Suffolk but Brian had to whizz away.

The pub’s table tennis table beckoned after lunch with Andrew, Sandra, Keith and Martin taking part, but the clear winner was Keith thanks to some demon spins.

Thanks go to Maurice for organising a great ride and to Andrew for getting the majority of us to the starting line on time.