A large gathering had been expected at the Fleur de Lys in Widdington, knowing that we would be celebrating Andrew’s receipt of his old age pension, but it turned out that John B had a birthday coming up too, and so the boys very kindly bought the drinks at the end of a delightful tour of Essex lanes.

We also celebrated having a new member join us, Roger Phillips, who has spent many years in the oil business, but not at all slippery! He dusted down his old Eddy Merckx bike and was soon whizzing along with the rest of us. Welcome Roger!

And so it was that 10 Windmillers comprising Maurice, Andrew, John B, Vernon, Keith, Lawrence, Chris, Ric, Roger and Martin set off in a north easterly direction towards Radwinter avoiding the main effects of quite a strong north westerly wind. It wasn’t long before a loud clatter came from Ric’s bike but it was nothing more than a loose mudguard which was soon fixed. (Hardly surprising given the miles that Ric clocks up through riding to and from the majority of our start points.) 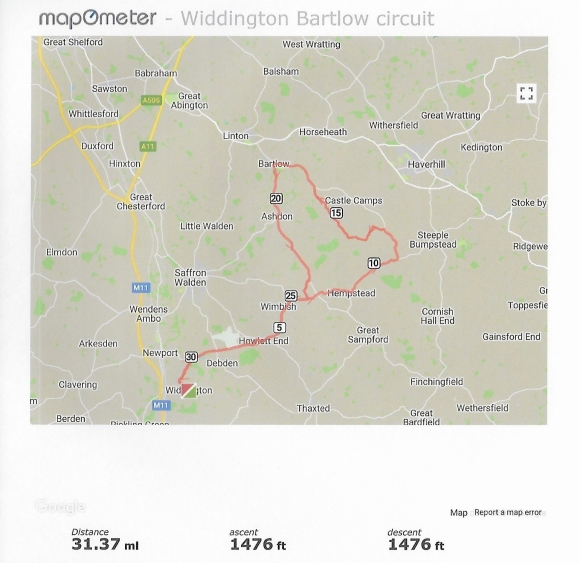 The lanes were quiet which once again allowed us to converse in peace whilst also enjoying the stunning sights, sounds and smells of spring time.

Maurice had planned a coffee stop at the recently refurbished Three Hills in Bartlow, and what a transformation it proved to be. Hats off to the local person who has retained many of the pub’s old features whilst enlarging it tastefully, including the creation of a large garden / barbecue area.

Maurice had planned the return route via Sewards End but when the first group took a left in Ashdon the others followed and so it was slightly less of a circuit and more of a lasso, but still very pleasant. At Radwinter we then retraced our pedalling to Widdington where, once again, we enjoyed a warm welcome and an excellent lunch around our familiar round table.

Thanks to Maurice for planning the ride and to the birthday boys Andrew and John B for buying the drinks. More birthdays coming up!