With Maurice away in Cornwall, our Deputy Dawg Andrew devised a canny North-South route from the Red Cow in Chrishall to avoid the winds on what was quite a blowy but otherwise very pleasant day. Timothy Taylor was there at the end to help quench our thirsts, having taken over the Red Cow for a few days, enabling Windmillers and others to sample brews other than Landlord. You could tell that Spring was in the air by the number of shorts being worn.

Those setting off on the ride comprised, besides Andrew,  John B, Vernon, Keith, Ken, Sandra, B Brian, Y Brian, Tom, Lawrence and Martin. So keen were some to clock up more miles than usual (or was it something to do with Timothy Taylor?)  that the Brians, Tom, Andrew, Ken and Martin all set off from their respective homes to reach Chrishall by the start time of 9.30am, resulting in total miles for the day ranging from 31 to 45 or more in the case of the Shelfordians / Staplefordians.

Here is the canny route:

The lanes were quiet, as usual, but potholes are becoming a more serious issue as each week goes by (now blamed by the Government on repairs not being made properly by utility companies and so pavements will be dug up instead…………..). So instead of keeping an eye out for red kites or deer, pothole spotting has become a main activity.

An early coffee stop was made at The Cricketers at Rickling Green  and then it was down through Manuden as far as Hazel End before taking a westerly route through to Upwick Green and finally northwards again through the Pelhams and back via Duddenhoe End. 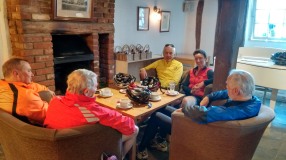 Thoughts of what Timothy Taylor had in store at the Red Cow never left some minds but, sadly, Tom and Yorkie Brian had to set off homewards before sampling his fine beers, except of course for Andrew who has been weaned off lager and is gradually on the path to real ale via Guinness. And so it was that we were treated not only to Landlord but also to Boltmaker, Knowle Spring and, courtesy of the Red Cow, a pint of Cook Lane IPA which we shared whilst enjoying an excellent lunch.

Thanks go to Andrew for leading us around our pleasant lanes and to Brummie Brian for some of the pics and the map.