Maurice was having some serious jaw engineering, but not from the famed Venezuelan dentist that Andrew uses, and there were no other takers which left just three Windmillers to saunter out on the first 3.00pm ride on a Monday for several months. The plan was to start and finish at The Pheasant in Great Chishill.

And so it was that Andrew led Sandra and Martin on a pleasant circuit of local lanes, struggling to shake off winter in places but showing strong signs of the spring to come in others. This was the route taken: 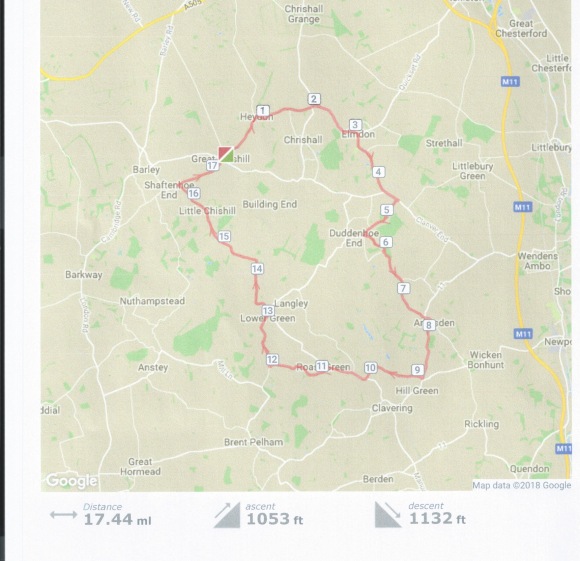 The mystery above is how we managed to descend more than we ascended from The Pheasant’s car park!

Spring was certainly in the air to start with – snowdrops, the odd daffodil, birds seeking mates to nest with and fields greening up everywhere but we were reminded of winter once again with snow in Elmdon and down that icy lane from Roast Green towards Anstey but, luckily not icy this time just slushy in places.

The Bull at Lower Langley had lights on! But, alas, on closer inspection it was closed and so we pressed on with time on our side as we were not due back at The Pheasant until 5.30pm when Mark kindly said he would open up early. Thoughts of using up time by doing a longer ride via Barley soon disappeared, however, due to black clouds looming and quite heavy rain starting as we approached Shaftenhoe End. So it was a rapid three hills (well, as rapid as the three hills can ever be) to return as fast as possible before getting soaked.

Alas, once again, there was no sign of lights or Mark at 5.00pm at The Pheasant and so we gave our apologies and set off to The Tally Ho in Barkway and enjoyed a beer there and good conversation with the locals in front of the fire. But with the evenings getting lighter it won’t be long before we once again enjoy succulent goujons and chips at The Pheasant after a Monday ride.

Thanks to Andrew for organising a very enjoyable Winter going on Spring ride. Let’s hope it’s all Spring from now on.