With service restored to normal, Maurice and Andrew back in charge and Storm Sandra returned to her box. The weather was perfect for riding out, the wind had subsided and the sun was shining. Suitable for exposing the legs (maybe for some of us anyway).

Five of us (Maurice, Andrew, Keith, Tom and Sandra) set off from The Pheasant. Tom having already cycled up to The Pheasant, telling us of his exploits on the way up, when you see other cyclists going in the same direction as you, what should you do? Catch them and pass them or use them to draft you along or a bit of both? Well, a bit of both seemed to be the case this time and for both cyclists!!! When they did stop together, they both commented how neither of them had realised how competitive they were!!

This competitive thinking must have rubbed off on the rest of us, because we headed towards Elmdon, dropped downhill to get speed up to climb the next hill, Tom took off closely followed by Andrew and Keith, my momentum took over and I went sailing down the hill passing Keith and Andrew closing in on Tom, only to have Keith come dashing past me in hot persute of Tom. Keith a sure winner there.

Racing over and the serious distance riding to go, we headed on a mission to meet Andrew’s latest addition to the family, Hector McDonald the adorable fox red Labrador. Charlie Bear keeping a watchful eye on this little mite. Suitably refreshed we headed from Wendons Ambo to Newport then on to Wicken Bonhunt, Arkesden, Duddenhoe End, Chrishall back to The Pheasant and a great welcome from Ollie, Simon and crew, as well as a warming fire, the shorts for an evening ride might have been a bit ambitious!! 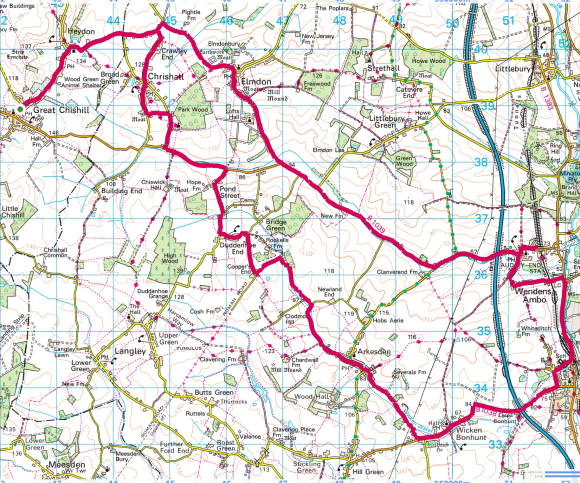