It was another of those knobbly knee, or not, autumn rides as eight hardy Windmillers gathered at the bridge over the River Lea in Waltham Abbey for a 37 mile ride to Tower Bridge and back. In the event only  Keith braved the slight chill but as the sun broke through he had clearly made the right decision as it warmed up considerably by the time we had wobbled along the towpath all the way to London town. The remaining participants were our leader Maurice, Vernon, Rod, Brian, Sandra, Chris and Moley Martin. This was the route taken: http://gb.mapometer.com/cycling/route_4431527.html

The first port of call was the white water centre at Waltham Abbey where thoughts of lifebelts were first had:

Then we set off into quite a strong head wind down 16 or so miles of towpaths alongside the Lea without touching a road until we reached Limehouse Basin via the Hertford Cut – a remarkable journey through some of London’s busiest north eastern suburbs. The path was narrow at times, particularly under bridges where a slight deviation could easily have resulted in the need for a lifebelt – a quick pump up of a spare tube was the only option we had to potentially save the life of a non-swimming Windmiller. The banks were lined with narrow boats and other craft almost the whole way, the occupants of which clearly had a very different lifestyle to landlubber Londoners. The river was not exactly busy but several boats were seen chugging away.

Thirsts could almost be photographed by the time we got to Limehouse Basin and so we dived into The Grapes for a quick pint before continuing our journey to Tower Bridge along cobbled streets.

Maurice ducked and dived through the narrow streets and alongside the Thames, where the views got better and better as we approached Tower Bridge: 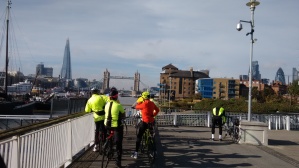 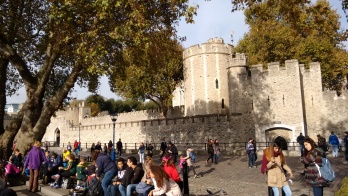 By this time it was gone 1.00pm and so thoughts again turned to gaining nourishment. After a brief stop at The Dickens Inn in St Katherine’s Dock, the consensus was to return to The Grapes where the beer was known to be good and the food proved to be both delicious, plentiful and very good value.

Fortunately, after such a large lunch, the tail wind whizzed us back to Waltham Abbey somewhat faster than the outward leg.

Thanks to Maurice for again organising this London ride. There was also talk of a future ride to the Cutty Sark in Greenwich.