Maurice planned a neat two county ride today of 36 miles – out from Thetford to Bressingham taking the Norfolk route and back via the Suffolk route, which made for a surprising contrast. It wasn’t just the wind, which was forcefully on the nose most of the way out, but the scenery too which included long forested Roman roads on the Norfolk side and lanes / heathlands on the Suffolk side. 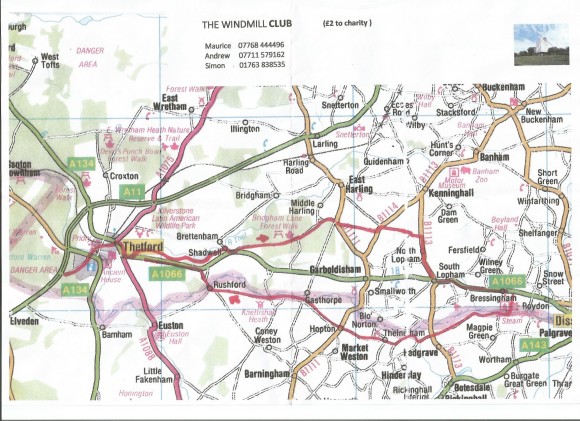 So a large puff of nine Windmillers set off from Sainsbury’s in Thetford at 9.30am, comprising our Squadron Leader Maurice, Deputy Dawg Andrew, Shepherd boy John B, Wee Jimny Ken, Captain Keith Pugwash, Tank Engine Tom (previously Marmite Tom but now in short supply in Tesco), Brummie Brian, Sandra Shearer and the Revd Moley Martin. It was a chilly start, 9C, with only Moley showing off his knobbly knees, at least until coffee time in Bressingham when they too were given additional protection. We were hoping to see steam in action, if only to warm up, but there was not a lot going on other than a small locomotive seen and heard puffing away in the distance whilst we had coffee, over which the main topic of conversation was the manufacture of linoleum (a concoction invented by a Scotsman of solidified linseed oil and cork dust it seems). Which led on to cricket bats, putty and 101 other things that can be done with linseed oil without being arrested, so get some today……….

After coffee we inspected the waiting room and heard that Bevan Braithwaite, a long time steam buff and CEO of The Welding Institute for many years, was a trustee of Bressingham Steam Railway before he died and that an engine he built is still used there.

The return journey was faster with the wind behind us, through very picturesque lanes and and heathlands which were different to other, more rolling, parts of Suffolk.

Instead of a pub, we stopped at an American-style diner in Thetford and tucked into massive burgers and other large portions of food before struggling to pedal the final couple of miles back to Sainsbury’s.

Thanks to Maurice for planning the route and not getting us lost, and also to his faithful sheepdawg  Andrew for getting us to the starting pen on time.