10 hot-to-trot riders left Trumpington Park and Ride at 18.00 on the hottest day of the summer so far with temperatures of around 30 degrees. 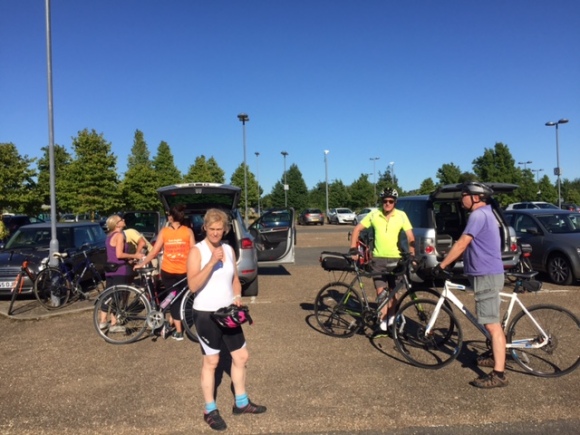 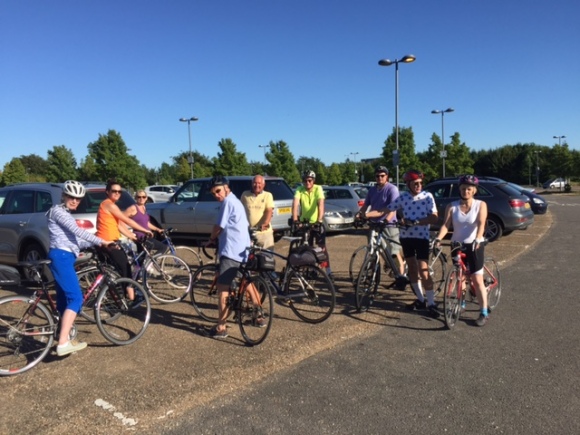 Our route took us through Grantchester along Grantchester Meadows into Fen Causeway down the Cam and into punting capital of the world Cambridge. At one point we had to dodge a beached punt which was being used as a photo prop.

Onward then past Kings College into the centre of town and around Market Square to rejoin the Cam near Magdalene College.

One of Deputy Dawgs responsibilities is to check the posse is still intact which involves looking backwards, which is not recommended on a busy hot summer night in Cambridge however, I survived with only a few near misses. Of course no need to turn and check if Lyn and Dayglow Laura are keeping up cause they’re always talking. Additionally, I knew when Low Cost Ryan was behind by the sound of his squeaky brakes.(those cheap electric bikes)

The route took us under a couple of railway bridges to the delight of the trainspotters in our company who will remain nameless – through some pleasant meadows with many contented cows (of the four legged variety) and to our outbound destination the riverside pub called The Plough at Fen Ditton. 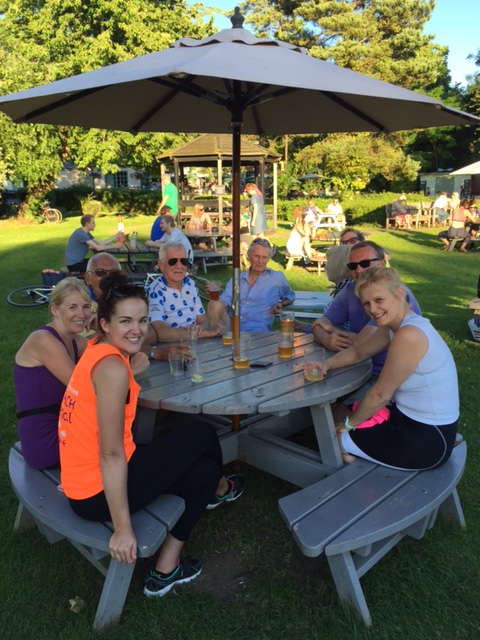 After only one refreshing drink at 20.00 we started our return journey from Fen Ditton along the Cam and through the centre of Cambridge, this time taking a more scenic route than the guided bus which has become somewhat of a hazard which buses recently jumping the rails (concrete)

One final photo at Garret Hostel Lane Bridge where we were photo bombed by a foreign tourist who appears to be also taking a selfie which included Two Scones in the background.

Our route finally took us along Granchester Road returning to Trumpington Park and Ride via The Blue Ball pub which Rev Moley and Two Scones couldn’t resist stopping for a cool refreshment .

I think the rest of us would like to have done similarly however, as Deputy’s Deputy Lindsey would say it was a School Night.

Many thanks to Squadron Leader Maurice for arranging another memorable ride and thanks to the beautiful Girlies for joining us.